Interview with Marco Poggianella, CEO and cofounder of SOP 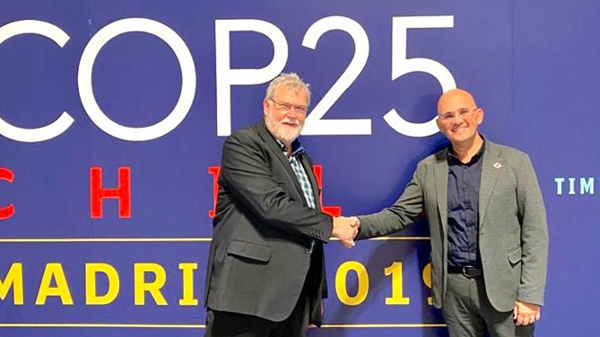 “By the end of the coming decade we will be on one of two paths.

One is the path of surrender, where we have sleepwalked past the point of no return, jeopardizing the health and safety of everyone on this planet. Do we really want to be remembered as the generation that buried its head in the sand, that fiddled around while the planet burned?

The other option is the path of hope. A path of resolve, of sustainable solutions."

This was the appeal to action against global warming made by António Guterres in his opening speech at COP 25 (Conference of Parties).

This year, at last, science was the star of the show. “Today, luckily only a handful of fanatics deny the evidence,” said the Spanish acting Prime Minister, Pedro Sanchez: the reports of the IPCC (Intergovernmental Panel on Climate Change) drawn up by thousands of scientists, demonstrate just how serious the situation is and how drastic action and exponential growth of that action must be taken in order to reduce and ultimately eliminate emissions as quickly as possible.

Data recently published by the World Meteorological Organization (WMO) shows that Greenhouse gas levels have reached a new record. The average world level of carbon dioxide reached 407.8 parts per million in 2018. The last time there was a similar concentration of CO2 was between 3 and 5 million years ago, when temperatures were between 2 and 3 degrees higher than today and the sea level was between 10 and 20 metres higher.

"I am (Marco Poggianella, cofounder and chairman of SOP) very happy to have been invited to participate at this event and to have met so many politicians and ministers from all over the world and, above all, to have met a number of scientists and managers from WMO, IPCC and FAO.

Agriculture is one of the increasingly critical topics being discussed at this type of event and, over the last few years,  an important trend has emerged, which began in California but which can now be seen all over the world, of finding ways to substitute milk, meat and cheese with alternatives (Impossible Burger and Beyond Meat among others). The main reason for the huge success of these products (with a dubious nutritional value, in my opinion) was the narrative that these products have a "lower environmental impact" with respect to farming. There were many vegan activists outside the gates of COP25 with a very powerful message: eating meat means killing the planet.

To be honest, I noticed very few farmers or their representatives. The absence of farmers surprised me, as some of the most recent reports from the main NGO and data modelling teams being examined by the global policy-makers, are asking for dietary changes towards plant based food. This could have significant economic and social consequences for the livestock farming industry and for consumers.

On a number of occasions, I have had the opportunity for discussion with senior decision-makers of FAO and the European Commission and they have always listened, with great interest, to the solutions that my company offers farmers in order to limit their impact on climate change.

The Director General of FAO, Qu Dongyu and his deputy, Zitouni Ould Dada, have both reiterated that the use of innovation and technology is key for the transition to sustainable agriculture. I'd like to add, if I may, that not only do agriculture and livestock farming still have a lot to "do", but they also have to "know how to tell their story" and that is why we participate, enthusiastically, in initiatives such as those of Ruminantia.

I have had the pleasure and the honour of spending a significant amount of time with former President of the WMO, David Grimes, together with whom I was also able to meet the Chairman of the IPCC, Dr. Hoesung Lee.

I was in total agreement with Dr. Hoesung Lee's statement that the contribution of agriculture and livestock farming is essential for the mitigation of Greenhouse gas production.

I explained how my company (SOP Save Our Planet), present in over 20 countries of the world, is committed to reducing Greenhouse gases , for example, those with an enteric (cattle) origin and those originating from the liquid manure of livestock (cattle, pigs).

I was able to demonstrate the results our products bring, including the possibility (as recently validated by the Università Cattolica of Piacenza) to reduce chemical fertilization without any loss in yield (the production, transport and spreading of nitrogen fertilizer has a very high impact on Greenhouse gas production).

But the three of us also talked about how, apart from mitigation, it is also essential to deal with adaptation, that is, to create greater resilience to the damage caused by global warming. Just think, climate change is the leading cause of forced internal migration in the world, affecting 3 times more people than conflict does: there are already over 20 milion, so called, "climate migrants".

Everyone was very impressed by the fact that the SOP solutions can lead to a significant reduction in water consumption or, in unirrigated areas, make the crops, such as wheat in southern Italy, more resistant to severe drought, such as that seen over the last few years or that which, unfortunately, is foreseen for the years to come.

These results are fruit of the benefits our products bring, including a significant increase in root biomass, another aspect which, by increasing the quota of carbon available to the roots, results in an increase in the quantity of organic substances stored in the soil, subsequently increasing the soil quality through time.

Even if there is still a lot of work to be done, with a lot more effort being required in order to face the climatic stress and meteorological variability which is central to the life of every farmer, as well as to the stability of the global food system, I still remain confident. I hope to be able to find the way to work together, through the many discussions and clashes of viewpoints  that were evident this week in Madrid.

Notwithstanding the apparant lack of ambition on behalf of the member States, I have seen that there are some dedicated groups that will continue to work together in order to guarantee water resources and adequate food production. I intend to work with these groups with a renewed conviction that we will be able to solve these problems. I think it will be possible to collaborate with farmers, policy-makers, data scientists, food producers, supply chains and, ultimately, with every single consumer to take practical steps towards better climate adaptation. And with this collaboration, we can prepare for our future, certainly a future with many new risks and challenges, but also a future in which we can truly save our planet."

SOP at the Cremona International Livestock Exhibition, 26 - 28 November, pavilion no. 2